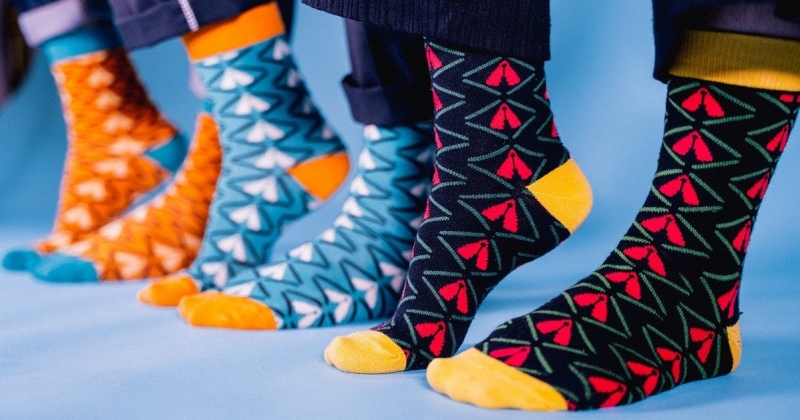 Everyone has a story to tell, but does every story deserve to be told? This story, for certain, deserves to be. It literally is in the name.

Allow us to introduce you to AKUKO, a brand that is both intriguing in its offering and captivating in its appearance. AKUKO is a gleeful sock brand founded by Arinze Prosper in 2019, in Malmö, Sweden, with eye-catching and compelling designs which offer more to it than appearance. Akuko can be translated as ‘’Story’’ or ‘’Story telling’’, an Igbo word from the ethnic group of the same name in Nigeria, of which he is a member. Essentially, these are socks which are more than just eye-popping basics or cool accessories; they are laden with stories which are arguably just as cool as the designs - if not cooler.

Why did he choose socks as a medium to tell stories? Well, the man loves to dress well and look good, and his socks are an integral part of his outfit - why let your feet be boring when you can make them special, right? Living in Sweden, you would be aware of the almost immutable social law that demands you take your damned shoes off when visiting someone’s home.

Over the years, while being a guest at more homes than he can remember, Arinze, who always has on a pair of socks that bring life to any floor his feet touch, realized how often he got compliments on them and how often conversations were started by his choice of footwear, conversations he was delighted to engage in. It was then he realized he could, in the same way, use socks to start a million conversations around the world, in rooms he was not even present in, that carried stories that were his own, stories that meant something to others and that could connect people.

That was the founder, now, the socks. Each design on every piece starts with a story, one that is representative of the creators origin, ethnic history and personal life journey. In our conversation, he led with a quote from the illustrious Chimamanda Adichie on the dangers of a single story that goes ‘’The single story creates stereotypes, and the problem with stereotypes is not that they are untrue, but that they are incomplete. They make one story become the only story." Who would disagree? Each collection design is meant to tell a different but connected story and they intend to tell as many new ones as possible. Stories build identity, they give perspective to yesterday and direction to tomorrow.

Thus the symbol behind their first collection, OGENE, was the gong, a traditional music instrument and rallying tool, which, outside of a musical setting, serves a similar purpose to a blow horn: to alert and gather people when important events are to occur or announcements to be made.  The gong is an assembler and a unifier, played by the Town Crier to herald things which demand attention. In the case of AKUKO, the gong is also the town crier. (If you do not know what a town crier is, google it. That’s the point of these very cool, very practical and very colorful socks - to teach something new while making your feet the talk of the room - literally).

The creative process behind their first collection, which took a while to perfect, was fostered by the incredible bond shared by the members of the team behind Akuko and it had a simple goal in mind: to offer an aesthetically satisfactory product that challenged stereotypes on African-owned businesses, reshaped perspectives on cultural identity and provided a sense of togetherness through the messages infused into them. The socks are themselves meant to be a unifier for the diaspora, but are certainly not limited in their appeal and appreciation; everyone has a place in this world stories. This is very much what AKUKO is about; Community. And people. Lives intertwining to create the beauty of the shared human experience.

You might be thinking, ‘Alright, they look cool, are culturally relevant and speak to the identities of a large group of West Africans, but what else are they good for?’ Well, sustainability. That’s what else they are good for- and really good at it. They are made primarily from textile derived from bamboo; a readily available, sustainable but still very underused resource for the making of clothing. 85% of West African bamboo goes unused and the rest is for other locally relevant processes such as building scaffolding, furniture and décor. It is a resource AKUKO hopes to help develop so as to empower local textile manufacturers in the near future, among other economically sustainable and bamboo related trades.

Their next collection, set to be made available in phases starting fall this year, is titled NSIBIDI, which is an ideographic language and writing system of symbols from the Biafra and cross river regions and predates the arrival of the first European visitors by several centuries. It was demonized by the missionaries of the colonial era - typical(rolls eyes), fell into disuse by the general public and was only kept alive by secret societies such as the EKPE, used as a means to share knowledge secretly.

The designs of the new collection will be inspired by and carry Nsibidi symbols, which is a move by AKUKO to challenge the erroneous but pervasive thought that sub-Saharan people had no writing systems prior to European visitors - they had several.

Fun fact: There are Nsibidi symbols in the throne room in the movie Black Panther. Guess someone did their research and did it well;)

This is what AKUKO does, tell stories through socks while adding value to fashion in a way not many do today. The new collection will be much wider in its offer, including underwear, swimwear, babywear and active wear. The development is ongoing and the technology is innovative and upped to develop fabric which is 95% bamboo - and they are doing this development themselves. Let’s hear some applause of anticipation!

When asked for last words during the interview, an enthusiastic Arinze said he would like to be remembered for doing something impactful. I too was very enthusiastic…about the socks. I mean, have you seen these socks? He also wants the product to do what he intends, bring people together, because, in his words, there is joy in helping others succeed and when one person wins, we all win.

Ironically, there is an Igbo saying he shared which goes ‘’Bamboo knows no boundaries’’ , as the bamboo plant is known to grow endlessly and takes over whatever land it grows on - see how that ties in with AKUKO? Their socks will soon be on all your feet - we intend to make it so.